HOLLYWOOD — Three new luxury apartment towers are expected to transform Young Circle in Hollywood, breathing life into a burgeoning urban scene but doing away with a landmark building in the process.

Developer BTI Partners of Fort Lauderdale plans to build 1,030 downtown apartments. The Bread Building, an 11-story landmark built in 1969, and an aging strip center will be knocked down to make way for all three towers on the eastern side of the circle, the last piece to finally get its long-awaited makeover.

Mayor Josh Levy says Hollywood has been waiting for at least a decade for a developer to come along with plans like these.

“It will completely remake the entire area,” he said. “This project helps us achieve our final vision for downtown, to have more people living downtown. It’s been something we’ve been working on for a long time.”

Here’s the plan: Two sleek and modern 35-story towers would rise on the east side of Young Circle where an eyesore of a strip shopping center now sits as part of an ambitious project planned by BTI Partners.

“They will be the tallest towers on Young Circle and in downtown,” said Keith Poliakoff, attorney for the developer.

The $400 million project calls for 668 luxury apartments — 328 in the north tower and 340 in the south — along with shops, restaurants and office space. A skywalk would connect the two towers at the second level. 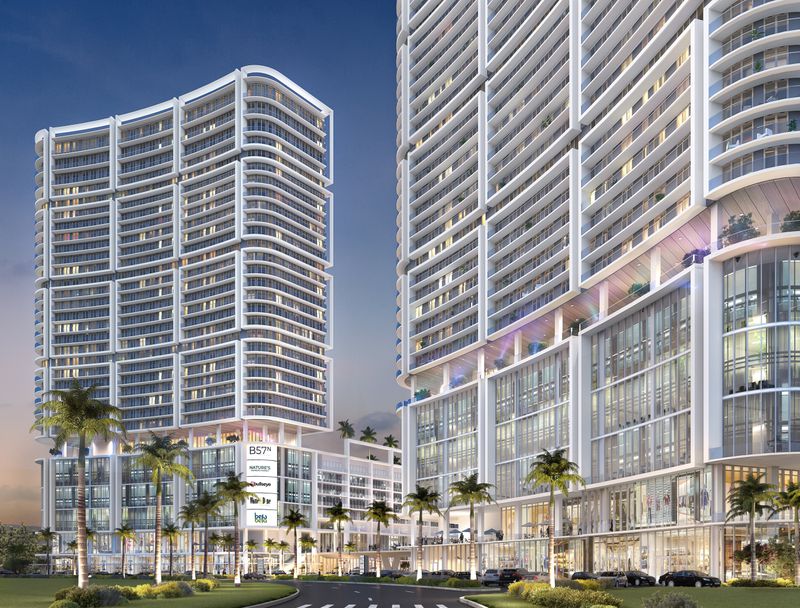 Two 35-story towers would rise on the east side of Young Circle in downtown Hollywood as part of a project planned by BTI Partners of Fort Lauderdale. The $400 million project calls for 668 luxury apartments in addition to shops, restaurants and office space. (BTI Partners/Courtesy)

In addition, a 25-story tower with 362 luxury apartments and ground-floor shops and cafes would rise where the Bread Building now stands. The Bread Building, which has sat empty for years, will be demolished this summer. In a nod to history, the vintage Bread Building sign will be saved and used on the new building.

“I think it’s time,” he said. “A lot of people say they love downtown the way it is, nice and quiet. But we need more people here to support all these businesses. Without critical mass, the businesses don’t last.”

RELATED: Hollywood Bread Building might be razed to make way for 25-story tower »

The trio of towers will give downtown Hollywood a new and taller skyline, said Clive Taylor, president of the Hollywood Historical Society.

“This is changing the landscape of historic downtown Hollywood, so a lot of people are resistant,” Taylor said. “I’m conflicted because we do need new housing units downtown, and the zoning plan was passed years ago. The ship has left the port.”

If architecture sets the tone of a city, Taylor says he’d like to see towers with a world-class design. 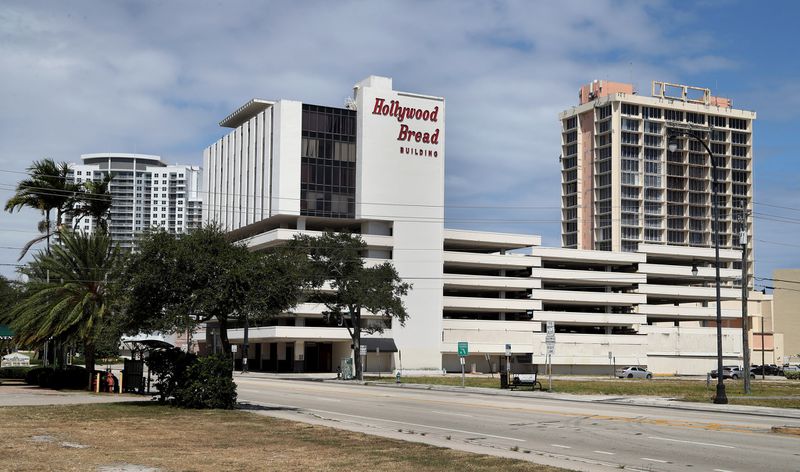 The Hollywood Bread Building, a landmark on Young Circle since 1969, will be torn down and replaced with a luxury apartment tower with 362 units and shops and cafes on the ground floor. (Susan Stocker / South Florida Sun Sentinel)

“If I have to look at a tall building till I drop dead I want it to be interesting,” he said. “I want to go, ‘Wow, look at that building.’ I’ve seen the designs. It’s really modern and sleek. It’s an improvement over what we have now.”

The developer plans to market the units as apartments, but there’s a chance they could later be converted to condos.

“They will be built so they could be converted in case the economic climate switches back to condos,” Poliakoff said.

Anette Karten, a Hollywood resident and real estate agent, says it’s about time Hollywood is getting its due.

“It’s exciting to see all these changes,” she said. “Hollywood has been waiting a long time for this. It already hit Hallandale and Dania. We shouldn’t get skipped. We’re like, ‘Hey, we’re here.’”

The Bread Building project would likely break ground at the end of this year and open by the end of 2023.

Construction on the two towers would come sometime after that, Poliakoff said. Commissioners are expected to vote on the project within the year.

“The hope is construction would begin within 18 to 24 months,” Poliakoff said. “The project will break ground as soon as the last tenant lease with Walgreens expires and they can demolish the center.”

“This city needs to move ahead and not stay in the past,” said Crawford, president of the Parkside Civic Association. “South Florida is growing whether you like it or not. In order for a city to survive, you have to grow and change with the times.”

Under the plan, the towers would straddle a new section of road that would open up the east side of the circle, giving drivers a more direct route to the beach on Hollywood Boulevard.

Drivers on Young Circle could head east underneath a skywalk connecting the two towers. 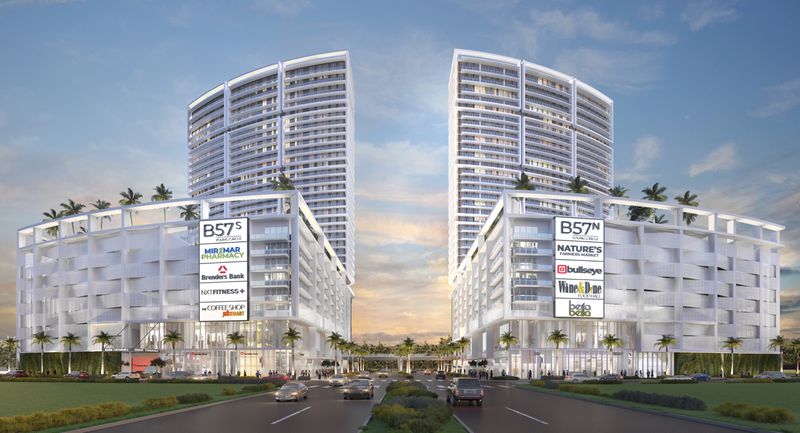 The BTI Partners project would change the way traffic flows around Young Circle. Under the plan, the towers would straddle a new section of road that would open up the east side of the circle, giving drivers a more direct route to the beach. (BTI Partners/Courtesy)

Right now, there is no connection to Hollywood Boulevard on the east side of Young Circle, where a Walgreens store and an old, closed Publix now sit.

The mayor says Hollywood is still in talks with state transportation officials about a long-planned redesign of Young Circle that would turn the busy U.S. 1 corridor through Hollywood into a two-way traffic circle with roundabouts instead of traffic lights.

The circle now has one-way traffic and seven traffic lights.

With the redesign, drivers on the inner lane would travel in a clockwise direction; those in the outer lane would travel counterclockwise, as they do today. Four roundabouts with lush landscaping would replace the lights at either end of Federal Highway and Hollywood Boulevard.

Part of the plan requires the parcel on the east side of Young Circle to be split to make room for a roundabout and give drivers heading to and from the beach a more direct access to Hollywood Boulevard.

That’s where the twin towers project being proposed by BTI Partners comes in, Poliakoff says.

“Our plan takes into consideration the future redesign of Young Circle to make sure the city’s vision can become a reality,” he said.