For Tampa’s api(+), Covid-19 has added a new dimension to retail design 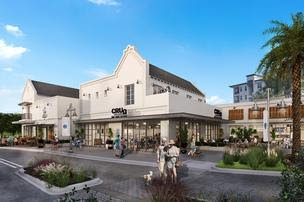 Most of the challenges facing retailers and restaurants in the wake of Covid-19 were there before the pandemic — but for architects like Juan Romero, designing those spaces is even more nuanced now.

Romero, the founder of api(+) in Tampa, has been designing retail spaces for over 30 years. In Tampa, his firm is behind two of the city’s most walkable urban retail nodes: the redevelopment of Hyde Park Village and Marina Landings, the retail space within the Westshore Marina District.

“It is the most challenging period I can recall in retail,” he said, “because there’s so many moving parts.”

Experience is more important than ever: Experiential retail spaces reigned supreme before the pandemic, as brick-and-mortar storefronts battled e-commerce for business — but the concept is even more important now, Romero says, and more complex to add to a space than a layman might think.

“In general we’re seeing the need and the request to create a great experience, but it’s accelerated,” he said. “People have gotten more comfortable shopping at home, so it’s even more important to create a good experience.”

That’s not always as easy as it seems, either.

“Even the [design components] that don’t look expensive are expensive,” he said. “You might say, ‘All they did was a mural on the wall,’ but there’s so much more to it than that.”

Part of the move toward experience is smaller stores, Romero said, and designing buildings for pedestrians, both of which allow for a more intimate experience.

Hands off: Romero is following cutting edge concepts out of London and Australia that are as touch-free as possible — for example, one is a fragrance store where customers wave their hand over a diffuser to sample the different scents. api(+) works with a number of grocery chains, Romero said, all of whom are reconsidering how to reconfigure self-serve cases in areas like the bakery.

“The super market industry is heavy right now in touch free,” he said.

It’s not just grocers that are adapting to curbside pickup for online orders: In August, Target Corp. said its curbside pickup sales grew 700 percent in the second quarter.

Get out: Outdoor spaces and ventilation are major priorities, Romero said, particularly for restaurants. The buildings at Westshore Marina District — designed before the pandemic — are meant to allow for maximum patio seating, and he thinks that trend will continue long into the future.

“I don’t think we’re working on anything that we’re not proposing outside dining space,” he said.