That rallying cry, authored by the U.S. Chamber of Commerce, received a strong endorsement last week from an array of South Florida businesses, as the Trumpadministration and China launched the biggest salvos yet in a growing trade war between two of the world’s leading economic powers. From real estate developers to boat builders to steel fabricators, businesses are nervously watching the emergence of U.S. tariffs against its major trading partners, as well as retaliatory measures that ensued from Canada, Mexico, China and the European Union.

Few could offer precise calculations of potential lost jobs and sales in a region where unemployment is at record lows and many businesses across the economic spectrum are enjoying superlative profits. But business leaders and professionals who monitor business activity for a living said they were beyond concerned as Washington imposed 25 percent duties on $34 billion of imports from China on Friday.

It was the first in a series of possible increases that President Donald Trump says could affect up to $550 billion of Chinese goods, more than the total amount China exported to the United States last year, according to The Associated Press.

“There are a lot of Florida-based [boat] manufacturers that sell all over the world, and it’s definitely going to affect them,” said Phil Purcell, CEO of the Marine Industries Association of South Florida. “We have leading brands here that the world wants.”

He said “America owns” the market for the manufacture of boats that are up to 40 feet. But tariffs, he said, could well affect jobs and the financial performance of companies. 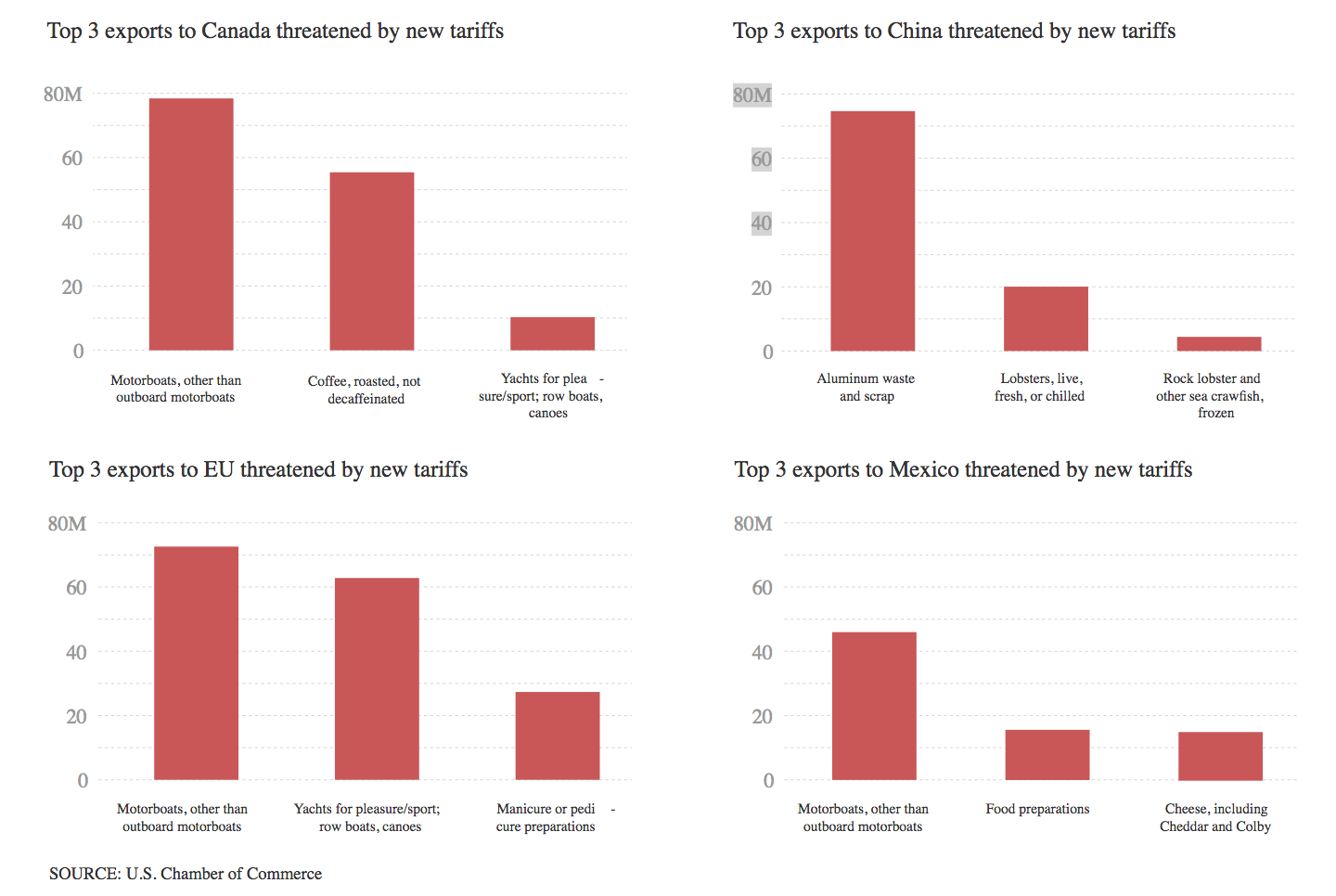 Earlier this week, the U.S. Chamber of Commerce, an ardent opponent of tariffs, issued a 50-state snapshot of exports threatened by retaliatory tariffs imposed by U.S. trading partners. It estimated that Florida exports to Canada, China, the European Union and Mexico are threatened by new tariffs worth $713.4 million against motor boats and yachts, fish, coffee, food preparations and dairy products. The share attributed to China is $112.5 million, the chamber said.

The port stands to pay more for materials on its construction projects. But it’s less likely to be affected by tariffs actions than PortMiami and others, as it is a “north-south” port that handles minimal cargo from Asia.

A number of Florida businesses are trying to extricate their products from Trump administration tariffs. Alumina Distribution Center of Opa-locka is seeking an exemption for imported metal from Colombia. The company makes doors, windows and hurricane shutters.

Not all industries are opposed to tariffs. In a letter to the Office of the U.S. Trade Representative, John Williams, executive director of the eight-state Southern Shrimp Alliance in Tarpon Springs, urged the imposition of levies against “all imports of merchandise” from the Chinese aqua-culture industry. The products, he said, are “contaminated” with antibiotics.

But as a statewide proposition, Miami attorney Peter Quinter, who has spent three decades practicing customs and international trade law, said there is “no doubt in my mind Florida will be negatively affected by these tariffs imposed by Trump.”

“Most Americans do not understand the massive amount of merchandise that is imported, assembled, manufactured or otherwise incorporated into another product in the United States, and then exported,” said Quinter, who chairs the customs and international trade law group at GrayRobinson in Miami.

“The entire supply chain of numerous products most people consider ‘made in the United States’ will be drastically affected if the current and proposed tariffs announced by Mr. Trump are implemented,” he said. “The result will be a recession, which many economists are now predicting. No one wins a trade war.“

J. Antonio Villamil, a longtime economist who heads the Washington Economics Group of Coral Gables, said he is concerned “on a number of fronts,” including trade, tourism, construction and new investment.

“We need open markets,” he said. “If you look at all of the aspects of the [Florida] economy, 25 percent of our labor force depends on global markets.”

“Florida will be more proportionately impacted than many states,” he said. “I would hope the congressional delegation, regardless of party, start raising some concerns about what a full blown trade war with all of these countries means.”

The real estate and construction industries, key drivers of the region’s economy, are experiencing pricing pressure on the materials used to build residential and commercial projects.

“What’s interesting is we recently started talking about aluminum and steel,” said Noah Breakstone, managing partner of Fort Lauderdale-based BTI Partners, a real estate development company and land investor. “We had tariffs implemented earlier on for lumber. When you look at the costs of construction for all asset classes — those are some of the key material components. It’s created upward pressure on pricing.”

When compared with a year ago, the price of lumber on the futures market is up 50 percent.

“The timing [of tariffs] for South Florida complicates our story,” he said. “Land has really escalated, the pricing. We’re continuing to see a rising interest rate environment. The cost of carrying land is going to be costlier. Skilled labor is under-supplied. Now we’re talking uncertainty in price escalation for materials.”

Buying forward, or purchasing materials ahead of the imposition of tariffs, is difficult to do, said another developer, Rodrigo Azpurua, CEO of Riviera Point Development Corp.

“You increase the financial costs because you are putting more money out there” for storage, insurance and on-site security, he said. “It’s really too complicated to mitigate it by purchasing in advance. And I know all of this because I have tried.”

In its most recent temperature taking of the South’s economy, the Federal Reserve Bank of Atlanta said business contacts it routinely interviews for its “Beige Book” reported increases in so-called “input costs,” particularly for steel, aluminum and transportation

And it’s the consumer who will pay for many of the increases, the Fed said. “Some companies reported the ability to pass along these commodity cost increases due to expectations of rising costs related to tariffs.”

Mike Jackson, CEO of Fort Lauderdale-based AutoNation and chair of the Atlanta Fed’s board of directors, is far from sanguine about Trump’s threat to slap tariffs on imported European cars.

“Automotive tariffs will make steel tariffs look like a company picnic,” said Jackson in a recent appearance on CNBC. “It will raise prices dramatically for consumers in the United States. It will be inflationary.”

Consumer confidence among Floridians already appears to be taking a hit, according to the most recent survey conducted by the University of Florida’s Bureau of Economic and Business Research. Its index fell 1.9 points in June to 98.3 from a revised figure of 100.2 in May.

“The drop in June’s confidence came primarily from consumers’ expectations about the national economic conditions over the next year,” Hector Sandoval, the bureau’s director, said in a statement this week. “This decline might come as a result of the potential impact that the new tariffs on imports and foreign retaliation might have on the economy in the short run.”